I have really started thinking differently...my severance is over and I need to start finding a source of income.  Will this be in the crafts, or will I have to work outside the home?  There are so many things to consider...How much do I need to make to have the lifestyle I want?...I live pretty simply, but I do enjoy traveling, opera, eating out and eating well, paying the bills...A lot to consider as I start the new era.

My tie-on experience on the December towels has been a loss.  I did get the knots all tied between the red and green towels, but as I said the process was more bother than it was worth. 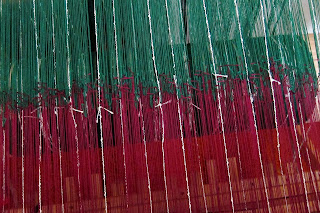 There were several problem areas.  First, as I said in the last blog, it took too much time for knots to be tied...Could I get faster with the knots to do a better job?  Second, I tried two different knots.  The first couple of inches I used a surgeon's knot, the remaining part I used a weaver's knot with the "slip knot" method.  I was looking for a knot that I could use to keep the warp tension even.  The slip knot method proved to do that quite well, although you can see some problems with the white boucle yarn in the picture.  But that problem of using two knots proved to be the final problem.

Because of the unevenness of the warp knots, I had to unweave cut out the header I had woven before tying the knots.  You can see from the new white header that I was able to even out the loose warp on the right side (where the first knots were).  I started weaving the red sample for the records and ran into the last problem...those first knots started slipping.
I wound the last 12 inches forward and started a new header for the green towels.  I will not have a sample of the red towels for my records...I will just take pictures.

The green towels are coming great, I do like this pattern and it is only four shafts!  The pin on the lace square is my "counting pin".  Each time I weave a repeat, I move the pin to the next square to the left, this way I can make sure I weave 14 pattern repeats and get to the end of the towel.  Here you can see the end with the extra plain weave for the hem and the two shots of "cutting line" for me to divide the towels.

I also managed to weave off the October towels on the Big Mac.  I was pleased how they came out and am excited to get them washed and hemmed.  I did not get pictures yet so they will show up in the next couple of weeks.

I am also working on yardage felt, so I will get the pictures taken soon.  It has been an interesting learning experience.  I had not made felt for a while and moving to a felting machine to do the rolling has been interesting...much faster, much messier (I will get better with that) and much bigger pieces of fabric.  I have made some "overdone" felt (I have found some slipper patterns to use this), some fabric weight (I want to try a jacket to see how it works), some "pre-felt" (never worked with this before), and some numo felt (felted on fabric).  ...I know I have a box of fabric, roving, and unfinished nuno felt for a jacket from a workshop a few years ago....I need to pull that out now that the machine is at my house to work on.   I also want to try the sheer scarves from wool/silk or wool/tensel roving.   Have you seen those? Rhe wool is so sheer that you can see through the scarf and the silk or tensel does not felt so there are ripples of fiber in the mesh.

Here is another picture of my sister's  doily...I love the compass rose look and on a solid background it shows up better. 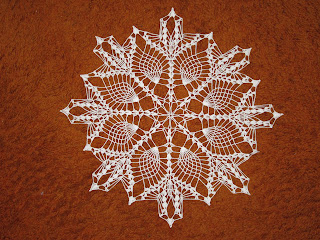 I also knitted another boy's hat from the Peruvian hat pattern.  I had yarn left over and the recipient of the first hat has an older brother...This way they can play in "twin" hats...just for fun. 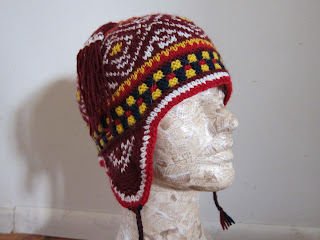 There was not instructions for the bigger version, so I just added another repeat of the main motif and played with the others to make them fit the new number of stitches.  Hope it fits and the boys can get some fun time with them...as we have had almost no snow this year, they don't need them for warmth or building snowmen!

Update on Weaving and Things

I have really been enjoying my days with no work to drive to.  I have gotten a lot done, probably not as much as I wanted to get done...but life is like that.

Most of my time has been spent learning to use a felting machine, but I have been slowly getting the tea towels done. I found that I have (again) created more work for myself.  I have been weaving on my December design towels, a great lace pattern with an outline of rayon boucle.  I designed the towels to be a two towel set, one in red and one in green.

I finished weaving the red and cut the warp in back of the shafts to tie on the new green warp.

I started this because I thought I could get the tension even enough to just continue weaving.  I'm still not sure about the evenness of the warp, but the time tying the knots is w*a*y too long.  I only had a little time the other morning until I had to leave, so I checked it out.  I tied about 45 knots in 30 minutes....so much longer than just rethreading the loom with the green yarn.  Tying on like this may be good for a loom that is hard to reach the heddles, or on a pattern that is very complex (like the snowflake twill I did it on before), but for this simple of a pattern, it is a waste.  I might be able to tie faster using Barry Conner's method of tying a weaver's knot, but I wanted to tighten the tension as I went, so I am using the slip knot method and it is too slow.  Well, "live and learn."  The towels are going to be lovely and they are for me, not for sales so the additional time is just pleasant "yarn fondling" time.

My sister found a stash of crocheted doilies that were done by her Grandmother-in-law and she wants to frame some of them for display.  The maker seems to have liked the Pineapple design, and I know it was popular years ago.  My sister brought them to our last "Sister Date" and had the black cloth to attach them to, but they were unwashed and had not been stretched.  I knew that they would look better if that was done, so I offered to take care of them.  (I enjoy doing it, it's fun to see a wrinkly looking little thing stretch out to a beautiful object.)

The biggest one ended up stretching out a lot, but I love the changes in it.  Look how the lines between motifs move and cross.  (It's hard to see on the pin board, but it will look great on a dark background and framed.)  I think the design looks like a Compass Rose.


The smaller one is also the Pineapple type design, but the pineapples are bobbles instead of the chains on the first one.  This one also had some stains and I am very glad they all washed out well.

These will both frame up well and will be a great remembrance for the family.

I love the pieces that I have framed up and also the fillet work that I use for a valance in my livingroom.  Old pieces are a joy to use and to look at.
Posted by Deanna 1 comment: 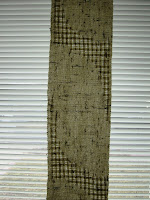